Centres of population of South Africa 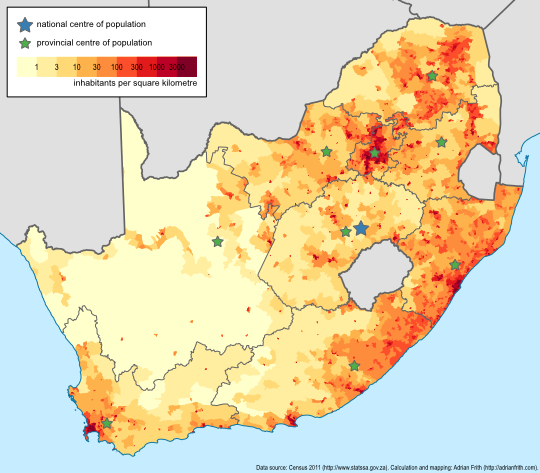 National and provincial centres of population, with population density. Click to expand.

The method of calculation is that described in the US Census Bureau publication Centers of Population Computation for the United States. This method produces a mean centre of population, and adjusts for the fact that the distance between meridians (lines of longitude) decreases with latitude. The calculations were performed in a PostGIS spatial database using the Census 2011 small area layer, the most detailed level of population data available fron the census.

The national centre of population is located at 28.28430°S 27.70690°E, at the foot of Ghwarriekop just outside the town of Senekal in the Free State. (If we ever decide to move all the branches of national government to one place, perhaps Senekal should be the site.) The population centre is substantially further east than the geographic centre of South Africa because South Africa is much more densely populated in the east than the west, as can be seen from the map above.

The provincial centres of population are: